“It’s like milk but made for humans”: Oatly capitalises on controversy in GC distinctiveness decision

The General Court (GC) has overturned the European Union Intellectual Property Office (EUIPO) refusal to register the mark “IT’S LIKE MILK BUT MADE FOR HUMANS”. The General Court was persuaded that Oatly’s slogan met the minimum requirement for distinctive character.

This surprise decision from the General Court signals a break from the EUIPO’s typical reluctance to register slogans consisting of ordinary words. The decision was influenced by the “controversial” sentiment of the mark, evidenced by a substantial backlash in Sweden, the UK and the Netherlands.

Oatly AB, known as “the original Swedish oat drink company”, is a giant in the expanding market for plant-based dairy alternatives, or “alt-milks”. The company are famed with pioneering oat based food and drinks products, but its startling growth has undoubtedly been fuelled by its quirky, even controversial, marketing campaigns.

On 14 March 2019, Oatly applied to register the word mark “IT’S LIKE MILK BUT MADE FOR HUMANS”, which was partially refused by the EUIPO for goods in classes 29, 30 and 32, including dairy substitutes and various oat based food and drink products. The EUIPO’s refusal on the basis of Article 7(1)(b) was upheld by the Board of Appeal and then overturned in this General Court decision.

The Board of Appeal assessed the relevant public to be the English-speaking territories of the EU: Ireland and Malta. This enabled the Board of Appeal to disregard some of the applicant’s evidence relating to additional territories, where English is not an official language.

In the GC appeal Oatly argued that the Board of Appeal should have taken into account English speaking consumers in Denmark, the Netherlands, Finland and Sweden. The General Court agreed that the EUIPO had erred on this point. The additional evidence included a Swedish court case and media backlash in the Netherlands and the UK which became pivotal, as the evidence demonstrated the controversy ignited by the launch of the slogan.

Both the Board of Appeal and General Court agreed that the relevant consumer circle was the general public which, critically, includes a non-negligible group of consumers who avoid milk for health or ethical reasons. This group was crucial to the question of how the mark “IT’S LIKE MILK BUT MADE FOR HUMANS” would be perceived.

You may recognise “IT’S LIKE MILK BUT MADE FOR HUMANS” as a lyric sung by Oatly’s CEO Toni Petersson in the now infamous 2021 Oatly Super Bowl advert. The “Wow, No Cow” song and advert was particularly strange and surprising for its low-budget feel, which juxtaposed with the expensive, star studded Super Bowl commercials viewers have come to expect.

The advert and song containing the lyric were first launched in Sweden in 2014 and allegedly took just one or two takes. However, the provocative tag line “IT’S LIKE MILK BUT MADE FOR HUMANS” presumably made up for this in legal fees, when the company was promptly sued by the Swedish dairy lobby LRF Mjölk, for being misleading and “scaring [consumers] into thinking cow’s milk is dangerous”. The Swedish Court ruled against Oatly, banning use of the provocative slogan in Sweden in 2015.

Undeterred, or even spurred on, by the Swedish ban, Oatly has re-launched its “controversial” campaign and slogan in various countries since. Repeatedly fuelling the debate over whether the tag line “IT’S LIKE MILK, BUT MADE FOR HUMANS” is an irrefutable fact, or misleading provocation of the dairy industry.

Undoubtedly, Oatly’s legal team had a difficult task on its hands considering Oatly has been arguing that it is a simple fact that milk is not made for humans for years, both during and since the Swedish case. However, clearly the slogan cannot be misleading and unfairly disparaging to the milk industry, as well as being simply factual and non-distinctive.

Through a literal reading of the slogan, “IT’S LIKE MILK BUT MADE FOR HUMANS”, one might reasonably conclude that the mark is non-distinctive, on the basis that it is a technically true statement of fact. Milk is not “made for humans” it is made for baby cows. After all, this is exactly the type of simple, fact-based messaging Oatly has built its brand on.

Indeed, the Board of Appeal decided that the relevant consumers would immediately recognise the phrase as promoting a factual, laudatory principle. The Board of Appeal found that the mark would be perceived as indicating that the goods applied for were similar to milk but “more apt for human consumption than real milk.”

As a result, the mark would simply be perceived as a promotional laudatory slogan, highlighting the positive aspects of the goods concerned. The Board of Appeal stressed that the mark was promotional because a relevant part of the public are vegan or don’t drink milk for health reasons.

In the GC appeal, Oatly argued that this was an error as the Board of Appeal had focused on the perception of a small sub-section of the general public, that is vegan or lactose intolerant, as opposed to the broader general public.

Oatly argued that the immediate perception of the broader general public is that milk is “a healthy and nutritious staple food”, produced for human consumption. Therefore the phrase evokes the controversial notion that milk is not appropriate in a human diet. As a result, the mark should be considered “paradoxical, surprising, thought provoking and unexpected”. This was evidenced by the Swedish Court case, discussed earlier, and the media backlash in the Netherlands and the UK.

In contrast, the EUIPO contended that the general public is aware of the continuing debate regarding the human consumption of milk from another animal and that the average consumer knows the primary function of milk is to feed baby animals.

In assessing all of these arguments, the General Court decided that the slogan “calls into question the commonly accepted idea that milk is a key element of the human diet” as evidenced by the backlash in the Netherlands, Sweden and the UK, where launch of the slogan triggered considerable controversy.

As a result, the mark was considered capable of triggering a cognitive process in the minds of relevant consumers, making it a memorable indicator of origin, which meets the threshold for distinctive character.

The General Court concluded that although a non-negligible part of the relevant public avoids consuming dairy products, this group of consumers are also highly aware of the commonly held belief that milk is essential to a human diet. Therefore, the mark is still capable of setting off a cognitive process for that specific part of the relevant public, as well as the broader general public.

This decision hinged on whether the relevant public immediately recognises that milk is produced for baby cows and, crucially, whether consumers perceive that as an uncontroversial fact.

Oatly avoided undermining its ethical principles, by harnessing the criticisms of its own detractors, in order to prove that the phrase is still controversial and that consumer perception has not yet matched Oatly’s own ideals.

While the EUIPO remains generally sceptical of slogans consisting of ordinary words, consumer perception is vital. If a slogan sparks sufficient debate or provokes backlash, this may be used as evidence that the mark meets the minimum threshold for distinctiveness in the EU. In the battle of fact v perception, perception will win.

We have also published a webinar about this decision. 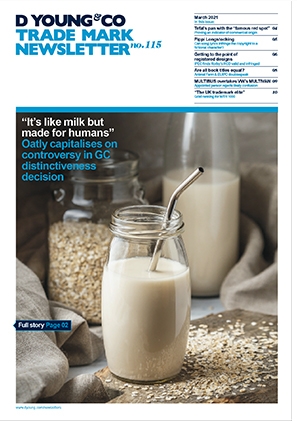