In 2011, the international landscape of substantive patent law changed significantly with the adoption of the America Invents Act (AIA) in the US, and modifications to the Patent Law in Japan.

The changes made and the ongoing debate of harmonizing substantive patent law triggered the Tegernsee Joint Questionnaire (TJQ) - a detailed study on four key issues for patent law harmonization: grade period, conflicting applications, 18 month publication and prior use rights. 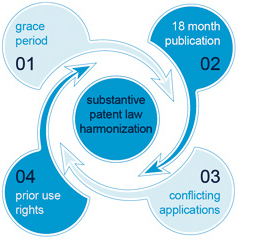 The TJQ included specific questions from the European Patent Office (EPO), and was posted on the EPO website from 10 January 2013 until 01 March 2013.

Before looking at the results of the TJQ, a few caveats should be noted. First, the sample of users was small and not representative. The composition of the group was distorted by the fact that some national user groups responded to the TJQ in only their own countries. Two segments of European users are also underrepresented: SMEs and universities. The TJQ therefore mainly shows the opinions of patent practitioners and large corporations in industry. Despite these caveats, the TJQ is still the largest, most detailed survey on fundamental issues of substantive patent law harmonization.

Perhaps unsurprisingly, the grace period section of the TJQ was the one which generated the most interest. It is also not surprising that the most frequent cause of pre-filing disclosure is a disclosure in an academic publication or an error by the inventor or an employee. For 63 percent of respondents, however, the grace period had either never been relied upon, or pre-filing disclosure was an extremely remote occurrence.

Despite the rare use of grace periods, it is clear from the results of the TJQ that it is a polarizing issue amongst European users. Only 52 percent were in favour on principle, and 39 percent of those included the caveat that the grace period must act as a safety net, ie, not for third party disclosures. The main reason for not having a grace period was that it diminishes the predictability and legal certainty of the patent system. However, an overwhelming majority took the view that if there were a grace period, it should be harmonized internationally (78 percent).

Provided that this grace period was harmonized multilaterally within a substantive patent law harmonization treaty (SPLH) package, including a classical first-to-file system, and mandatory 18 month publication.

Publication after 18 months is common to many of the world’s patent systems. However, whilst it represents a balance of interests between inventors and third parties, it also provides competitors with sufficient time before grant to copy or design around technologies. Additionally if search or examination results are not provided before publication, applicants are not able to easily decide whether to withdraw an application to avoid publication and keep the invention as a trade secret.

Despite these issues, the majority of European users indicated in the TJQ that a maximum time period of 18 months is reasonable for applicants (80 percent), and third parties (72 percent). 85 percent also believed that search/examination results should be required to be provided before publication. Although several commented that this information was needed much earlier, ie, within the priority year.

One of the only jurisdictions where publication at 18 months is not mandatory is the US. Interestingly, however, the publication opt out rate in the US has been declining for the last several years and is currently at approximately 6 percent of applications fi led per year. In line with this trend, 68 percent indicated in the TJQ that opting out of 18 month publication in the US does not influence their business strategies.

Conflicting applications are those which have an earlier priority date or filing date than the application being examined, but which are published later. These can be third party applications or applications from the same applicant (known as self-collision).

Treatment of conflicting applications varies between the three main jurisdictions Europe, the US and Japan as show:

The empirical data collected from the TJQ showed that conflicting applications are a rare occurrence. Nevertheless, European users indicated that the harmonization of this issue was important (46 percent) or critical (46 percent), since it is part of the definition of prior art. Users also indicated that they are prepared to be flexible on this point: almost 79 percent were prepared to consider the modification of rules in their jurisdiction as part of harmonization.

Generally the European patent treatment of conflicting applications was seen as best practice. The majority of European users were also against anti-self-collision. The issue of PCT applications becoming prior art merely upon designation was, however, controversial.

Prior user rights are dictated by national patent legislation and they vary within Europe. In the UK for example, a person has the right to continue an act already begun (or in preparation) before the priority date of an invention, which would otherwise be an infringement of a patent for the invention.

The TJQ results showed that the issue of prior user rights does not arise very frequently. Perhaps unsurprisingly, the results also showed that the main role of these rights is to redefine bargaining positions of parties in a conflict situation, and occasionally these rights are effective in deflecting litigation.

When considering best practice, 56 percent held that prior user rights should be available to a prior user who has used the invention in good faith and derived knowledge from the applicant. 76 percent also indicated that at least “substantial” preparations should suffice for prior user rights to arise.

It appears that a majority of European users could accept an internationally harmonized safety net grace period, including mandatory prior user rights arising until the priority or filing date, as part of a harmonization package comprising also classical first-to-file, 18 months publication and possibly also conflicting applications. There also seems to be a certain flexibility within European users for the change that would be required to reach this level of harmonization.

In our next newsletter we willl compare user data collected in Europe, the US and Japan for these four fundamental issues of harmonization. More information on substantive patent law harmonization, the Tegernsee process and the TJQ can be found on the EPO website.

More information on substantive patent law harmonization, the Tegernsee process and the TJQ can be found on the EPO website.