The General Court (GC) has recently rejected an application for a declaration of invalidity brought by Simba Toys GmbH & Co KG (Simba) against a 3D trade mark registration for the shape of a Rubik's Cube. 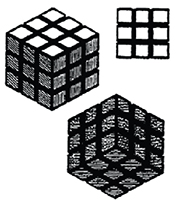 In 2006 Simba applied for a declaration of invalidity in respect of the CTM based on Article 7(1)(a) to (c) and (e) of the CTM Regulation.

Simba's request was rejected by both the OHIM Cancellation Division and the Board of Appeal. Simba appealed to the GC.

The grounds of appeal and the decision of the GC

Simba's arguments were based on infringements of certain provisions of the CTM Regulation. The GC considered the various grounds of appeal and rejected each of them in turn, as follows:

1. Infringement of Article 76(1): OHIM should examine the facts of its own motion in proceedings involving absolute grounds.

The GC considered that the Board of Appeal had conducted a detailed examination of all of the arguments and evidence before it and had fully identified and considered all the features of the CTM.

2. Infringement of Article 7(1)(e)(ii): signs which consist exclusively of the shape of goods which is necessary to obtain a technical result shall not be registered.

Simba argued that the black lines present on the CTM perform the technical function of allowing the individual elements of the Rubik's Cube to rotate.

This argument was rejected by the GC which emphasized that the black lines, which form a grid structure on the CTM, did not suggest that the elements of the cube depicted were capable of being moved in a particular way.

The GC highlighted that Simba's arguments were based on prior knowledge of the fact that the Rubik's Cube in reality has horizontal and vertical rotating capabilities. However, the GC found that these properties were internal to the Rubik's Cube itself and were not apparent from the graphical representation of the CTM.

3. Infringement Article 7(1)(e)(i): signs which consist exclusively of the shape which results from the nature of the goods themselves shall not be registered.

Simba argued that the Board of Appeal had failed to take account of the fact that the individual features of the CTM were dictated by the function of the product.

The GC rejected this argument and pointed out that 3D rotating puzzles did not need to be in the shape of a cube with surfaces that have a grid structure and in fact could take many shapes.

4. Infringement of Article 7(1)(e)(iii): signs which consist exclusively of a shape which gives substantial value to the goods shall not be registered.

Simba argued that the individual features of the shape depicted in the CTM are necessary for a 3D puzzle which encompasses the ability to rotate, along with a degree of difficulty and ergonomic functions, and therefore that the shape gives substantial value to the goods concerned.

The GC considered that Simba's argument was flawed as it focused on the functional, and not the aesthetic, aspects of the CTM.

5. Infringement of Article 7(1)(b): trade marks which are devoid of distinctive character should not be registered.

Simba argued that the CTM was devoid of distinctive character.

The GC rejected this argument and confirmed that Simba had not produced evidence demonstrating that the CTM lacked distinctive character or which showed that the CTM resembled the shape most likely to be used for a 3D puzzle. Furthermore, the GC held that the CTM displayed certain characteristics (eg, the appearance of the 'black cage' on the surface of the CTM) which made it inherently distinctive.

6. Infringement of Article 7(1)(c): trade marks which consist exclusively of signs or indications which may serve, in trade, to designate the kind, quality, quantity, intended purpose, value, geographical origin or other characteristics of the goods shall not be registered.

Simba argued that the CTM is descriptive of a 3D puzzle in the shape of a 3x3x3 cube and that the public would understand that the black lines featured on the CTM are the result of the rotating capability of the cube depicted.

The GC concluded that the public would not perceive a direct and specific link between the mark and 3D puzzles. Furthermore, without prior knowledge of how the Rubik's Cube operates, consumers would not perceive the black lines on the CTM as indicating that the cube in question can be rotated.

7. Infringement of Article 7(3): the absolute grounds for refusal set out in Art 7(1)(b) to (d) of the CTM Regulation may be overcome if a trade mark has acquired distinctiveness as a result of the use which has been made of it.

The GC held that the Board of Appeal was correct to have dismissed this ground of appeal as a result of finding the CTM to be inherently distinctive.

8. Infringement of Article 75: OHIM should state the reasons upon which its decisions are based.

The GC held that the Board of Appeal did not need to set out its reasons exhaustively and its reasoning was sufficient in this instance.

The GC's decision confirms that in order for objections to succeed under Article 7(1)(e)(ii) any technical function which a shape trade mark possesses (for instance, the rotating capability of the Rubik's Cube) must be readily apparent from the graphical representation of the mark at issue, or it must be possible for the relevant public to clearly infer such functions from the representations of the mark. It will not be possible to read functionality, gained from experience with the actual products themselves, 'back' into the representation of the mark.

The shape of the Rubik's Cube remains a validly registered CTM.

The black lines on the CTM did not result from the alleged rotating capability of the goods, as this rotating mechanism was internal and invisible.

The CTM displayed sufficient characteristics to be considered inherently distinctive.

The case is a useful reminder of the hurdles which shape trade marks must overcome in order to be registered.