Are trade marks in other languages confusingly similar?

Recent decisions of the Court of Justice of the European Union (CJ) in El Corte Inglés v OHIM and the General Court (GC) in Rotkäppchen-Mumm v OHIM have considered the issue of whether a trade mark and its foreign language equivalents are confusingly similar or likely to give rise to a link in the mind of the relevant public.

In an Office for Harmonization in the Internal Market (OHIM) Opposition Division (OD) decision dating from 1999 the OD confirmed that the opponent's earlier Spanish registration for the mark CINCO OCEANOS was conceptually similar to the CTM application for the following mark:

The OD in this case considered that a Spanish consumer would associate the words RED BARON with the words BARON ROJO as "red" is a common English word which Spanish consumers would be familiar with. Accordingly the marks were conceptually identical and there was a likelihood of confusion.

In 2005 the Court of First Instance of the European Union (CFI) (now known as the General Court) considered an application to register a Community trade mark (CTM) for the word mark HAI, which means "shark" in German and Finnish. The application was opposed by Osotspa Co. Ltd based on their mark.

The CFI considered the fact that the word "shark" is translated as "hai" in German and Finnish, as "haai" in Dutch and as "haj" in Danish and Swedish. The court concluded that it was therefore possible for people who speak those languages to understand both of the marks SHARK and HAI as meaning "shark". As a result the marks in question were found to have conceptual similarity, albeit that this depended on some prior translation. The CFI ultimately found that since the relevant goods were generally subject to widespread distribution and were bought "on sight" by the public, the significant visual and phonetic differences between the marks cancelled out the conceptual similarity, resulting in no likelihood of confusion between the marks.

In contrast the OD in this case found no conceptual similarity between the earlier German registration for DAS GOLDENE BLATT and the CTM application GOLDEN PAGES, essentially because the word "pages" was not a direct translation of the word "blatt". As a result there was no likelihood of confusion between the marks.

In this case the General Court (GC) found that the marks BALLON D'OR and GOLDEN BALLS had only a weak degree of conceptual similarity for the relevant public, which required some prior translation. This finding was based on a number of considerations, including the fact that the mark GOLDEN BALLS is in the plural and the different positions of the words GOLDEN and D'OR within the marks. This weak degree of conceptual similarity, along with the lack of visual and phonetic similarities, ruled out a likelihood of confusion between the marks, although not necessarily a 'link' for the purpose of Article 8(5) (this latter point was referred back to OHIM to reconsider).

The GC in this case confirmed that the marks HALLOUMI and HELLIM were not visually or phonetically similar. The GC then pointed out that the average consumer in Cyprus, where both Greek and Turkish are official languages, will understand that the marks refer to the same specialty cheese from Cyprus. There was, therefore, some conceptual similarity between the marks, however, in view of the fact that the earlier mark HALLOUMI was descriptive and of weak distinctiveness, the conceptual similarity was not sufficient to give rise to a likelihood of confusion.

The applicant applied to register the word mark THE ENGLISH CUT as a CTM and this was opposed by El Corte Inglés (ECI) on the basis of its earlier Spanish word mark for EL CORTE INGLÉS and the following CTMs: 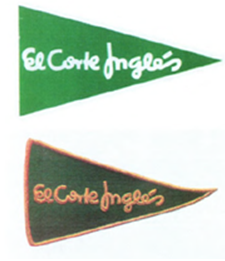 The GC agreed with the Board of Appeal's finding that the marks were not visually or phonetically similar. In relation to conceptual similarity, the GC took the view that Spanish consumers would be able to perceive the meaning of the signs as being identical only after translating the mark THE ENGLISH CUT into Spanish. There was therefore a low degree of conceptual similarity between the marks, however, the marks were different overall and there was no likelihood of confusion between them. The GC went on to consider that, since the signs were not similar for the purposes of Article 8(1)(b) CTMR, the conditions laid down in Article 8(5) CTMR were not satisfied.

ECI appealed to the CJ who held that the GC should not have characterised the signs as being essentially dissimilar, when the GC had earlier found a degree (albeit low) of conceptual similarity between the marks. The CJ reiterated that Article 8(5) CTMR requires only a degree of similarity which would lead the relevant public to make a link between the marks (rather than confusing similarity, which is required for Article 8(1)(b) CTMR). As the GC had not applied the test in relation to Article 8(5) correctly the CJ referred the case back to the GC to reconsider this issue.

The ECI case can be contrasted with the decision from the GC regarding the application to register a CTM for the mark RED RIDING HOOD. The mark was opposed by Rotkäppchen-Mumm Sektkellerein GmbH based on their earlier German mark for ROTK?PPCHEN which translates to the title of the fairy tale "Little Red Riding Hood".

The OD rejected the opposition and the Board of Appeal dismissed the appeal concluding that the signs were visually and phonetically different and that no conceptual comparison was possible because German-speaking and English-speaking consumers of the EU would not perceive that the signs both referred to the fairy tale "Little Red Riding Hood".

The GC found that it had not been established that the meaning of the mark applied for, consisting of the words "Red", "Riding" and "Hood", would immediately be understood by the general public of the EU. Furthermore, the lack of root common to the German word "kappchen" and the English word "hood" did not allow the relevant public to immediately perceive that they have the same meaning. The considerable differences between the marks meant that the relevant public were not able to make a conceptual comparison.

In cases concerning everyday words and their foreign language equivalents there will usually be a degree of conceptual similarity between the marks, although this may not be sufficient to support a finding of a likelihood of confusion, particularly if the marks are not visually and phonetically similar.

It is possible that the existence of even a low degree of conceptual similarity between a CTM application and a mark with a reputation may lead the relevant public to make a link between the marks for the purposes of Article 8(5) CTMR and it will be interesting to see what the GC says on this point in the ECI case.