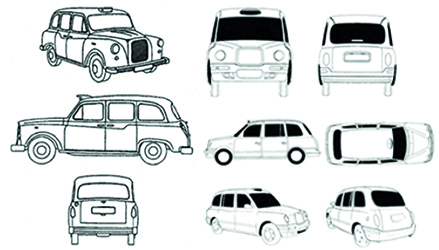 The judge at first instance not only dismissed the claim for infringement (and the allegation of passing off) but also went on to hold that the registrations were invalid. LTC appealed (on no less than 26 grounds!) and the Court of Appeal has now issued its decision. In a judgment which considers the validity of 3D shape marks amongst other issues, the original decision was upheld with the court confirming that the LTC trade marks were invalid for lack of distinctive character.

Inherent distinctive character is a necessary condition for registration in the case of a mark consisting of the shape of a product. The shape, to be registrable, must be one that departs significantly from the norm or customs of the sector for products of that kind. Further, the mark must be perceived by the average consumer as identifying the origin of the goods. There was much discussion in this case about the average consumer. LTC sought to argue that this should include members of the public hiring taxis. The court disagreed. As LTC’s registrations covered class 12 goods it held that the public are users of the service provided by the consumer of the goods; however, ultimately, little was to turn on this point.

The judge at first instance concluded that the marks would have been perceived by the average consumer of taxis as merely a variation of the typical shape of a taxi. The principles for applying this assessment were set out by the CJEU in Joined cases C-344/10 P and C-345/10 P Freixenet SA v OHIM and the subsequent General Court decision in case T-629/14 Jaguar Land Rover Ltd v OHIM. Here, the Court of Appeal held that as a first step it was necessary to determine what the sector is. Then it is necessary to identify common norms and customs, if any, of that sector. Thirdly it is necessary to decide whether the mark departs significantly from those norms and customs.

For some reason LTC did not suggest that the sector should be limited to London licensed taxi cabs. The court held that the sector could include all private hire taxis. This could be any model of saloon car within reason. Having established that, Lord Justice Floyd commented: “When the LTC features are compared with these basic design features of the car sector, each is, to my mind, no more than a variant on the standard design features of a car. A windscreen has a slope, a bonnet has a height and a grille has a shape. It is obvious that none of the LTC features is so different to anything which had gone before that it could be described as departing significantly from the norms and customs of the sector. Whether considered individually or as a whole the LTC features are simply minor variants on those norms and customs.” On that basis the marks were held to lack inherent distinctive character. So the court went on to look at issue 2.

This was the major area of dispute between the parties. The judge at first instance had already commented on this in relation to 3D shape marks in his decision in Societé des Produits Nestlé SA v Cadbury UK Ltd concerning the validity of marks depicting the shape only of a four-fingered bar of chocolate sold under the word mark Kit Kat. That case also went to appeal. The accepted test is now:

The applicant must prove that, as a result of the use they have made of the mark, a significant proportion of the relevant class of persons perceives the goods designated by that mark, as opposed to any other mark which might also be present, as originating from a particular undertaking. Put another way, the mark must have come to identify the relevant goods as originating from a particular undertaking and so to distinguish those goods from those of other undertakings.

Accordingly, it is not sufficient for the trade mark owner to show that a significant proportion of the relevant class of persons recognise and associate the mark with the trade mark owner’s goods. They must go further and show that they perceive the goods designated by the mark originates with a particular undertaking and no other.

LTC took issue with the conclusion reached in the original decision where the judge accepted that LTC had educated the public that they were the manufacturers of their taxis, but concluded they did not take any steps to educate the public that the shape of their taxis denoted their trade origin. Although the court noted LTC’s argument had some force (there was in cab advertising to that effect, it was not persuaded that it would be justified in interfering with the judge’s conclusion at first instance. The court went on to say:

In the case of a shape mark, the public are not used to the shape of a product being used as an indication of origin. One must be careful therefore to distinguish this message admittedly conveyed to them by the shape, from that which is necessary to show that the mark has acquired trade mark significance.

The court therefore declined to find that the judge in the High Court came to an incorrect conclusion on this issue, or one with which the Appeal Court could properly interfere.

The court did not feel that this was critical to the overall decision to dismiss the appeal. If it had then a referral to the CJEU would have occurred as the presiding judge did not regard as entirely clear cut the question of whether, in addressing substantial value, one should take into account or ignore the fact that consumers will recognise the shape as that of a London taxi.

LTC faced the same difficulties in establishing the necessary goodwill for the purposes of a passing off action as it did in relation to showing acquired distinctive character the purposes of their trade marks. The court concluded that the design of the new FNR / Ecotive Metrocab is strikingly different to that of LTC’s taxis and accordingly would have reached the same conclusion as the judge at first instance.

This decision shows once again the high hurdle that a brand owner needs to reach in terms of seeking protection for three dimensional shapes as trade marks. Although courts often stop short of commenting on whether registered design protection is more appropriate, this is just the latest in a long line of cases which ultimately reach the same conclusion. Here, the LTC taxi shape would have long since passed the end of any design protection. In any event, as can be seen from the pictures here it is doubtful whether this would have been of any assistance to them.

A further point to note is that even if the brand owner can show sufficient distinctive character another significant obstacle may still remain and one where there has been little case law to date. Where the design does depart from the common norms there is a risk the shape will be seen as adding substantial value and thus once again is barred from protection.