In this article we summarise key points from the recently published “EUIPO Trade Mark Focus – 2010 to 2019 Evolution” report, which focuses on the successful progress of EUTMs over the last decade.

Direct EUTM filings between 2010 and 2019 included over 3.4 million associated classes of the Nice Classification, headed by class 9 (electrical apparatus; computers) and followed by class 35 (advertising; business management) and class 42 (scientific & technological services), the three of which representing slightly over 25% of the total classes filed.

The average deficiency rate was at almost 35%, of which the vast majority (46%) related to classification of goods and services.

These are for the most part identical with the list of top 10 applicants, including nine of the ten top 10 EUTM applicants (LG Electronics, L’Oréal, Novartis, Samsung, GSK, Huawei, Johnson & Johnson, P&G, Novamatic, Nestlé). Of these top ten, which represent 1.3% of overall EUTM registrations from the past decade, enterprises based in Europe account for 49.2%, while Asian companies file 38% and North American firms the remaining 12.9%.

More than 176,000 oppositions were filed during the period of 2010 and 2019. While the number of oppositions per year remains relatively stable, the opposition rate per application decreased from 14.3% in 2010 to 10.7% in 2019 due to the higher growth in absolute filing figures.

In the past decade, over 353,000 EUTM registrations were renewed. On average, more than 50% of the EUTMs were renewed (for the first or second time).

The latest EUIPO report builds upon and updates the first edition of the Trade Mark Focus Report, first published in 2018.

For more information about the 2020 report see the EUIPO website: 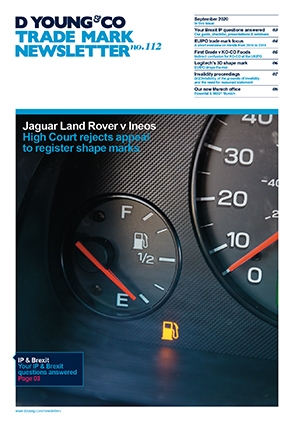