The High Court of England and Wales has found there to be infringement of certain ice cream van designs and a related trade mark in an interesting case which serves to illustrate the High Court's approach in assessing individual character, particularly with regard to the validity of registered designs of specialist vehicles.

Whitby Specialist Vehicles (the claimant) is the largest manufacturer of ice cream vans (which are adaptations of existing vehicles) in the UK.

Whitby sought to enforce a number of UK design rights relating to various aspects of their "Mondial" ice cream van (concerning its external appearance) along with a UK registered trade mark, against Yorkshire Specialist Vehicles (the defendant). Yorkshire had made up to 30 vans which were considered to be infringing.

The validity of the registered designs

The earliest prior art was considered to be an earlier Whitby design for another ice cream van named the "Millennium". 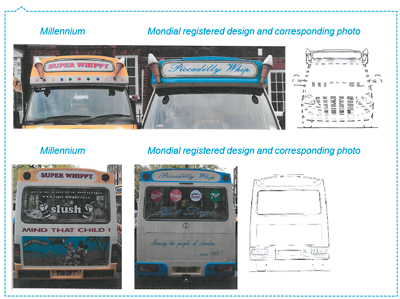 Whitby had accepted that the design of the Mondial was not revolutionary but rather an evolution of the Millennium model and that the registered designs had a relatively narrow scope of protection as a result of the fact that it was not a significant departure from the design corpus.

Whitby argued however that the Mondial design was still novel and had individual character. The judge agreed. He said that the Mondial design produced a different overall impression on the informed user, from whose viewpoint the designs must be compared, who is particularly observant, either because of personal experience or extensive knowledge of the sector in question.

Infringement of the registered designs

Mr Justice Arnold concluded that despite there being "minor differences" between the design of Yorkshire's van and the registered design, the designs were obviously similar and therefore infringement was found.

Infringement of the registered trade marks

To add salt to the defendants' wounds, the judge also found that Yorkshire infringed Whitby's registered trade mark by using the wording WHITBY MORRISON on one of the copied panels of the vans.

This identical mark was registered as a word only trade mark in 2000 by Whitby for ice cream vans and their parts and fittings.

Liability of the fourth defendant

The father of the two individuals against whom the action was brought was also sued.The judge found that he had both primary and joint liability for all of the design infringements by virtue of the fact that he had the requisite reason to believe that the copying of Whitby's Mondial model was indeed an infringement.

The case provides a useful reminder that when assessing the validity of a registered design, it must produce a different overall impression on the informed user when compared with earlier designs in order for the design to be valid and enforceable.

Even where the scope of a registered design is relatively narrow in certain circumstances, infringement will be found where two designs are sufficiently similar.