The General Court has issued two decisions in a tussle between Allergan and Dermavita concerning a revocation against the mark JUVEDERM ULTRA. The interesting questions arising from the proceedings were whether (i) it is possible for use evidence to support goods in two different Nice classes, and (ii) EU Directives / Regulations can have any bearing on classification of a trade mark specification.

In 2007, Allergan Inc. (predecessor in law to Allergan Holdings France), filed an application for JUVEDERM ULTRA for:

The mark was registered in 2008 and Dermavita Co Ltd Parseghian & Partners (predecessor in law to Dermavita Co Ltd) filed a non-use cancellation action in 2016. The Cancellation Division partially upheld the revocation, maintaining the registration for injectable pharmaceuticals in class 5 but revoking the goods in class 10.

On to the Board of Appeal

The Board of Appeal dismissed Allergan’s appeal, finding that evidence of use for class 5 goods was generally precluded from supporting the class 10 goods (in principle a product cannot belong to two classes). Further, the evidence provided did not show use in connection with “dermic implants” in class 10.

Dermavita’s appeal, directed at the class 5 goods, argued that EU Directives concerning medical devices and opinions of medical professionals supported a finding that Allergan’s goods were not in fact “pharmaceuticals” so its use of the mark did not support the registration. The Board of Appeal dismissed this argument - the class 5 goods were “pharmaceutical products”, not in the sense of medicinal products but rather “other preparations for medical use”, and were correctly classified.

Allergan’s appeal claimed that its goods have a dual function as pharmaceutical products in class 5 as well as dermal fillers, a subcategory of artificial implants, in class 10. It claimed the pharmaceutical component of the goods in question is immediately absorbed after injection, whereas hyaluronic acid gel expands and settles under the skin, forming a subcutaneous implant which deteriorates over time. The hyaluronic acid gel, once injected, would function as an artificial implant.

The General Court disposed of this argument rather quickly. It noted the EUIPO’s argument that dual classification of the same product is not normally possible in the light of the wording of the relevant regulation. Allergan had not argued that its goods were “composite goods” with a dual function. Further, as the Cancellation Division and the Board of Appeal had both observed, it was not established that Allergan’s dermal fillers were used as artificial implants within the meaning of class 10. Rather, they were used as dermal fillers within the meaning of class 5. The General Court took the view that Allergan was seeking to protect the same product under two different headings of the Nice Classification.

The General Court concluded that the only function of the goods in question was filling wrinkles of the skin. Allergan had not established that a dermal filler constituted an “implant” in class 10. The General Court favoured the Board of Appeal and Cancellation Divisions interpretation of class 10 “surgical implants” – namely implants composed of artificial materials. It also noted the EUIPO’s argument that an implant is generally associated with surgery, whereas the goods in question are “injectable dermal fillers” and cannot constitute an implant at the same time.

Dermavita’s appeal was based on a claim that injectable dermal fillers were not “pharmaceuticals” such that Allergan had not used the mark for goods in class 5. Dermavita contested the classification of the goods as “pharmaceuticals” rather than their classification in class 5. The question was whether the goods for which the mark was used aligned with the goods as registered. By reference to other EU laws, Dermavita argued that the goods had no medical purpose intended to “treat or prevent disease”, but were intended to be used for beauty purposes.

However, the General Court found it was irrelevant that the goods may not be “pharmaceuticals” within the meaning of other EU Directives, and the Board of Appeal did not err when it found that goods should be classified in accordance with the Nice Classification system. The Board of Appeal did not make any error when finding the goods had to be in class 5 as “pharmaceutical products”. Further, it was noted that the goods have several medical applications and are often administered by injection by medical practitioners and clinics.

Thus, the General Court decision confirmed the Board of Appeal and Cancellation Division were correct to maintain the registration for class 5 goods.

Goods / services are classified under the Nice Classification by reference to their function or purpose. Generally speaking, separate evidence will need to be shown to support goods falling in different classes. For example, “gloves” can fall within class 9 (for example, protective gloves) or class 25 (clothing): evidence for the latter would not support the former.

The decision in the Dermavita appeal is a reminder that the Nice Classification is the ultimate yard-stick for determining the correct classification of goods/services. 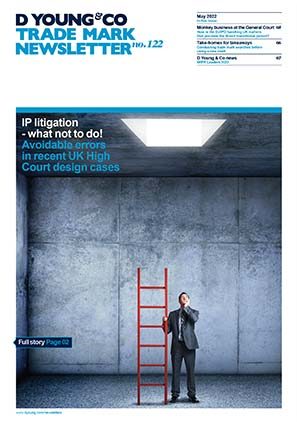