Shooting for the stars? Have faith. Why the SkyKick case is important for brand owners

If, as expected, the Court of Justice in Europe (CJEU) confirms the Advocate General’s opinion early next year (2020), not only will important but previously grey areas of the law have been clarified, but it will also alter the way in which brand owners clear, file for and enforce their trade mark rights in the EU.

How the dispute arose

Sky is a subscription TV provider also offering telephony and internet services. The dispute originally arose when Sky objected to SkyKick’s use of its name supplying cloud migration services. Sky alleged infringement in relation to a number of their earlier registrations for SKY. In response SkyKick applied to the Intellectual Property Enterprise Court (IPEC) in the UK for a declaration of non-infringement. Sky then sued for trade mark infringement in the High Court and the proceedings were joined with a judgment handed down by Justice Arnold early last year. The judge referred a number of questions of pan-European importance to the CJEU on which the Advocate General has now issued his opinion.

The two most important and commercially relevant questions for brand owners were:

Advocate General Tanchev handed down his opinion on 16 October 2019. Early on, he acknowledged that the questions posed have a significance that goes well beyond the case in question and is liable to impact brand owners and their trade marks in Europe. He said: “…we have arrived at a point in trade mark law that grants the trade mark proprietor a position of absolute monopoly in the face of which one can no longer defend himself in infringement proceedings – in spite of the fact that the mark has not been used, and is not likely to be used, for many of the goods and services in respect of which it was registered. Thus, this case illustrates the tension that exists today between the various interests which need to be balanced”.

1: Requirement of clarity and precision

The Advocate General concluded that a trade mark cannot be declared invalid on the sole ground that some or all of the terms in the specification lacks sufficient clarity and precision. He went on to state that a lack of clarity and precision may, nevertheless, be taken into consideration when assessing the scope of protection afforded to such a registration.

Unclear and imprecise terms such as, for example, “computer software”, may be considered contrary to the public interest. As a result, registrations with terms which are deemed to lack the necessary clarity and precision could be successfully partially invalidated.

In certain circumstances, the Advocate General confirmed that applying for the registration of a trade mark without any intention to use it in connection with the claimed goods or services, may constitute an element of bad faith. He referred, in particular, to the instance where the sole objective of the applicant is to prevent a third party from entering the market, including where there is evidence of an abusive filing strategy (multiple filings for the same mark in an attempt to “evergreen” the owner’s rights).

The Advocate General’s opinion will now be considered by the CJEU which will issue its judgment in the next few months.

What action should brand owners take?

Assuming the CJEU does follow the Advocate General’s opinion it seems likely that there will be a relatively rapid change in practice across the European Union in a number of key areas.

First, when filing applications trade mark owners will need to take care that the terms used in the specification have sufficient clarity and precision.

Those offices that actively examine applications are likely to start raising formal objections to terms such as “computer software”, “financial services” and the like. This will certainly include the EUIPO and the UKIPO.

Second, brand owners will also have to review their existing registrations which may contain overly broad terms. Voluntary restrictions of the specifications can be filed however brand owners retaining broad specifications with insufficiently clear and precise terms will need to be aware that seeking to assert their rights may lead to a counterclaim for the partial invalidity of their registrations.

Third, when it comes to enforcement, brand owners will need to consider both the issues of clarity and precision and also bad faith. Where multiple registrations have been filed over a number of years for a trade mark with the intention of keeping third parties out of the marketplace or indeed to negate the proprietor’s requirement for having to file proof of use, for example, in an opposition, it is quite likely that courts in the various countries in the European Union will uphold counterclaims for invalidation.

Finally, this case may also impact on brand owners who routinely undertake clearance searches for new names and logos.

With the increased prevalence of broad and lengthy specifications over recent years, clearing a mark for use has become increasingly difficult and requires additional research into the genuine commercial activities of the owners of earlier rights.

If the court upholds the Advocate General’s opinion, clearing a mark may actually become easier simply because brand owners conducting searches can be confident that a registration covering, for example, “computer software” will not entitle the registered proprietor to assert its rights across all types of software. In practice they will only be able to maintain a legitimate claim for the software of commercial interest to them.

The Court of Justice’s judgment is keenly awaited and we hope to be able to report further sometime during the first half of 2020. 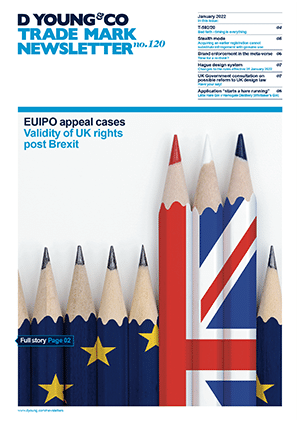